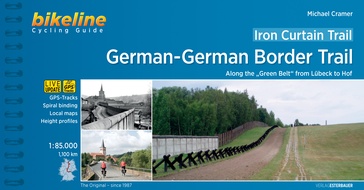 Praktische fietsgids met detailkaarten, ingetekende route, informatie over overnachten en fietsenmakers, zwaarte en hoogteprofiel. In spiraalbinding, Engelstalig
The Iron Curtain ran for about 7,000 km from the Barents Sea in the north straight through Europe to the Black Sea and divided the continent in East and West. Until the Velvet Revolution in Eastern Europe it was a physical and ideological border between two blocks which conceived each other as enemies. Not only were many neighbouring states divided, but Germany itself was divided into east and west. Today there are hardly any reminders that the wall ever existed.
The border in Germany was 1,400 km long. The former death strip was composed of 3.000 km of fences, car-trenches for 730 km, 830 observation towers, the brightly lit roads, walls and bunkers – most of it is gone. Remaining are the vehicle roads with their perforated paving stones and several observation towers. And in a few years the sparse vegetation will be supplanted by much more voluptuous green. It is now almost two decades since the wall fell; the Iron Curtain is hardly visible in Europe any more.
After 1989, the question about what to do about the wall occupied many minds. Most people wanted to have the wall disappear completely – for political as well as ethical reasons. A small minority thought beyond that, fought to keep the wall preserved. They were private individuals, representatives of landmarks’ commissions, popular initiatives – they prevented grass from covering up the last traces.
One of those who thought to preserve parts of the wall was Willy Brandt, Lord Mayor of Berlin when the wall was built. Exactly one day after the wall was breached, Brandt, who had been chancellor and had won the Nobel Peace Prize, said to the people in front of the Schöneberger City Hall (city hall to West-Berlin during the time Berlin was divided): “We should save a piece of this horrible structure to remind us of this historic monster. No less than when we discussed in Berlin the pros and cons of letting the Wilhelm Memorial Church stand.”
And the former “Green” Senator for City Planning and Environmental Affairs, Michaele Schreyer – later an EU-commissioner – overrode all objections by her coalition partner SPD and placed the wall segment at the Niederkirchnerstraße on the list of protected landmarks. At the time, almost everybody became her enemy; today they’re all grateful that there is some authentic wall at this site.
The German-German Border Trail
Not only was Berlin divided, so was all of Germany, for decades. It was therefore necessary to preserve the memory of this along the 1,400 km former border. For that reason the national caucuses of the SPD and the Greens proposed on June 30th, 2004 to transform the former “death strip” along the German border into a “living space”. According to the proposal it would be developed for “sof” tourism“, and be a part of a European Green Belt along the former “Iron Curtain”. The Bundestag voted for this unanimously in December 2004. The present book describes the German-German Border Trail in the “Green Belt”, which approaches 150 natural parks, 150 flora-and-fauna areas, three biosphere reservations Schaalsee, Elbaue and the Rhoen and the National Park of the Harz Mountains. It takes one from the Baltic to the Czech border, passes countless rivers, streams, and lakes and takes us through the higher parts of the Harz mountains and through the forests of Thuringia. We pass many monuments and border land museums and also several of the remaining observation towers. Of course there are many alternatives to taking this path. One can remain on the western or on the eastern side, one can stay close to the border or bike some distance from it, one can take the former control road with its perforated roadway or one can choose asphalt. The route in this book stays as close as possible to the former border, but stays on as comfortable a path as possible, avoids heavily travelled roads, integrates many historical monuments, crosses the former border at several points and informs about many monuments and museums.