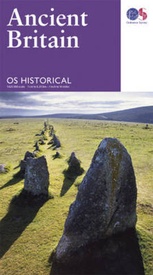 The Ordnance Survey Ancient Britain map is a comprehensive guide to the most important archaeological sites of early English, Welsh and Scottish history.

Ordnance Survey's Ancient Britain map shows Neolithic, Bronze Age, Iron Age, Roman and early Medieval sites – against a backdrop of modern mapping. This extract shows some of the ancient sites of Wiltshire marked on the map.

The secrets of Ancient Britain are to be revealed in a revised Historical map and guide from Ordnance Survey.

Aimed at anyone with an interest in the early history of Britain – from schoolchildren through to archaeologists and tourists – the map helps bring the past to life.

Information on the map includes ancient roads and place names – as well as comprehensive features and illustrations on many aspects of life in the period, including land use and settlement sites. Photographs, showing how many of the sites look today, are also used to give context.