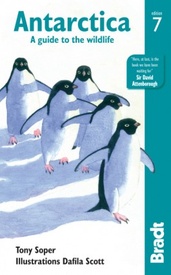 A superbly illustrated and attractive new edition of this traveller’s companion to the wildlife of the Antarctic wilderness. Dafila Scott’s illustrations provide the perfect accompaniment to naturalist Tony Soper’s immaculate text. This guide provides full coverage of plumage and identification, breeding and nesting, feeding and the best locations to observe the varied species to be found in Antarctica.

Updated throughout, the 7th edition of Bradt's Antarctica: a Guide to Wildlife is the most practical guide to the flora and fauna available for those 'going south'. Celebrating the amazing and often unique species of this spectacular environment, the title features chapters on the region's famous whales and penguins, and also on lesser known species such as skuas and sheathbills, with full coverage of plumage and identification. Each chapter is accompanied by vibrant illustrations from Dafila Scott to help bring species to life. Tony Soper's immaculate and engaging text remains the indispensible choice for the intrepid wildlife enthusiast.
Antarctica's wildlife is under threat. The Southern Ocean is warming and the most obvious effect is on the continental ice shelves. Spectacular retreats and monster carvings from the west coast of the peninsula have been seen in recent decades. Less ice means fewer krill, which depend on the ice-edge for the algae which nourish them. In turn, this will impact on seal and whale numbers. In the case of penguins, while kings and macaronis, for instance, are doing well, the magnificently adapted and truly Antarctic species, Adélies and emperors, are in decline. In the case of emperors, maybe by as much as 50%.
Bradt's Antarctica not only helps you to identify and understand species and habitats, it also explains the issues faced by this extraordinary continent, regarded by many as one of the most precious places on the planet.


About this Destination
The storm-tossed Southern Ocean and the inhospitable landscape of Antarctica combine to form one of the last true wildernesses on earth. They are also home to vast numbers of animals, from the tiny shrimps of the zooplankton to the penguins, albatrosses, seals and great whales for which this extraordinary region is justly famed.

Tony Soper is a veteran natural-history presenter, film maker, lecturer and author. Dafila Scott is an artist and zoologist, member of the Society of Wildlife Artists and ’Scott of the Antarctic’s’ grand-daughter.

(20) Code of Conduct for Visitors to the Antarctic